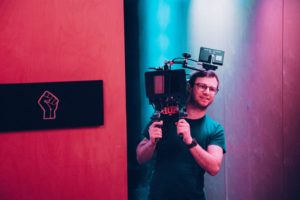 Anthony Littlechild has been involved in the Australian Film and Television industry his whole life.  Anthony's passion for film production drove his decision to become a cinematographer, a role he has enjoyed for over a decade.

As the driving force behind Creative Head Rentals, it is Anthony's goal to support the Australian film industry by allowing access to high end gear, and unique equipment without the ridiculous purchasing overheads.

From humble beginnings in video production, Creative Head Rentals started as the brain child of Anthony Littlechild, who realised that equipment accessibility was limited in the Australian Film and Television Industry.

In the last four years, Creative Head Rentals has positioned themselves as a competitive option in today's rental market for high end camera equipment and sundry goods, meaning better accessibility for a wider creative pool.

The future looks bright, as Creative Head Rentals continues to invest in the Australian creative arts by investing in itself to maintain its reputation as a cost competitive option for some of the best equipment around.

Let's work on it.